News and events
« Back to news
Oct 31
IFCM President and Vice-President visiting the First Astana-The Voice of the World in Kazakhstan
Published: Oct 31,2018 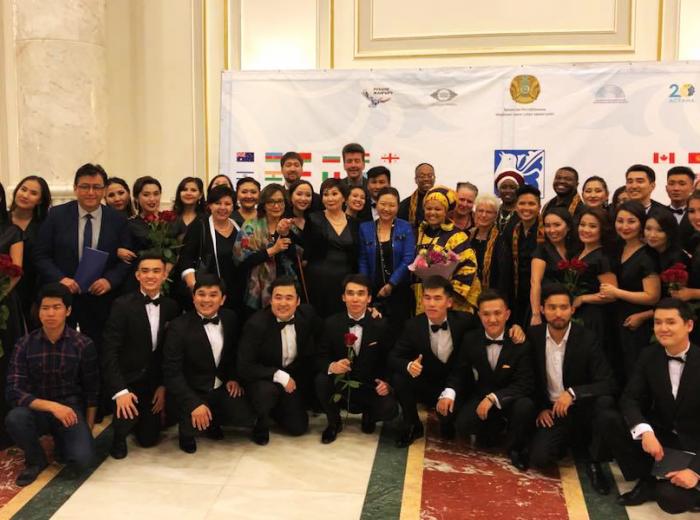 This autumn offered a magic event in Astana, the first festival ‘’Astana-the voice of the world’’. It was the first time in the history of Kazakhstan that Astana hosted choirs, conductors, musicians from 5 continents and 25 countries around the world. The concept of this festival was a great opportunity for our community to rejoice and share our culture.

Special guests of the festival were President of the International Federation of Choral Music (IFCM), Emily Kuo Vong, and President of the European Choral Association – Europa Canta (ECA-EC) and IFCM Vice-President, Gábor Móczár. We witnessed an historical moment when leaders of IFCM and RPA (Republican Public Association "Kazakhstan's Choir Conductors") signed up a draft agreement. Meetings with these leaders were very fruitful and future projects were discussed. Gulmira Kuttubadamova (Chairman of the RPA) gave the opening speech, followed by Emily Kuo Vong and Gábor Móczár who gave a presentation of IFCM and ECA-EC.

The festival’s workshops were very interesting and at the end of three-days program the eyes of the participants were lighted-up. Each choir had a chance to perform their own short program at a concert "A World Hymn" which was a palette of unique performances. Hundred and twenty singers have been honoured to open the VI Congress of the Leaders of World and Traditional Religions performing Kazak song. The artists turned out to play the strings of the souls of the whole auditory, lightening up their eyes and joining in one big family. The festival will be echoing in our hearts for a long time and we will all be looking forward to meeting again!