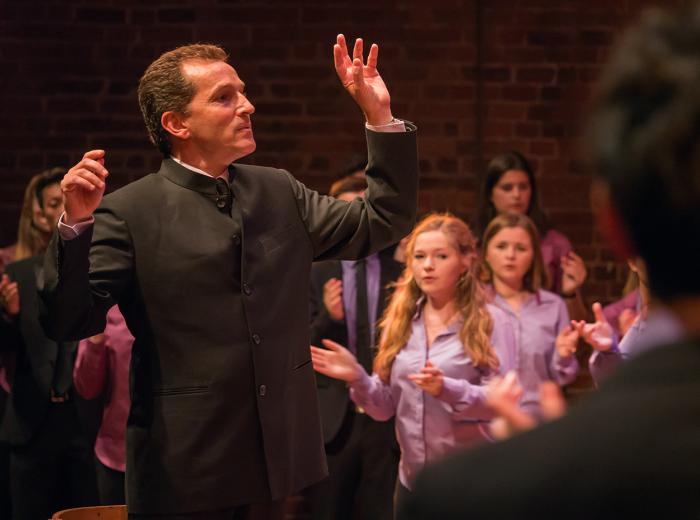 Founded in 1983 as a single choir of 100 of the best singers in the nation, the National Youth Choir of Great Britain (NYCGB) is now the flagship youth ensemble in the Arts Council England’s national portfolio. The NYCGB boasts over 800 singers between the ages of 9 and 25, and its members hail from every part of the UK.

Ahead of their visit to WSCM2020 in Auckland, the choir was asked a few questions. So too was their Artistic Director and Principal Conductor, Ben Parry.

Inspired by their “amazing UK choral tradition” as well as taking an innovative approach to broadening the scope of what ‘choir’ means, the NYCGB has in the last five years appeared at the Royal Albert Hall, Royal Festival Hall, Queen Elizabeth Hall and Snape Maltings, both independently and alongside such diverse artists as Daniel Barenboim, The Real Group, Kylie Minogue and Gustavo Dudamel… in repertoire ranging from Beethoven to beatbox!

Ben, who is half-German (and directly related to Felix Mendelssohn!), says he is bringing the choir to New Zealand in July 2020 because “sharing ideas is the best way to educate ourselves and our singers.”

As the choir themselves put it, “WSCM is one of the best meetings of the international choral community and we were desperate to visit New Zealand. We think New Zealand will be an excellent opportunity to perform alongside some of the world’s greatest choirs and showcase The National Youth Choir of Great Britain on an international stage. We’re also looking forward to doing some serious sightseeing.”

So what can audiences expect of the NYCGB’s performance in Auckland? They will sing a 2016 Kerry Andrew commission ‘Who we are’– the title says it all. They believe too that Symposium attendees will enjoy Ben Parry’s ‘Flame’, which also has a very powerful message about community and sharing.

More about the NYCGB here