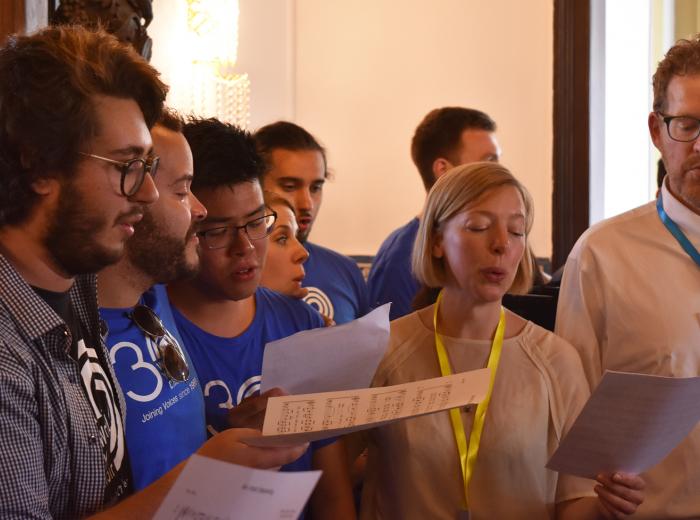 For 30 years, the World Youth Choir Foundation has provided an extraordinary, high-level choral experience for singers, ages 17-26, from around the world. The WYC Foundation consists of three patrons: IFCM, Jeunesses Musicales International (JMI), and European Choral Association-Europa Cantat (ECA-EC). Since 1989, there have been 1000+ singers from 65 countries in 35 sessions under the leadership of 47 internationally-acclaimed conductors.

In late July and early August, two 30th anniversary celebrations were held: one in Lisbon, Portugal, during the World Choral EXPO and one in Vaison-la-Romaine, France, during the Les Choralies festival after the 2019 WYC’s final performance. WYC alumni, former conductors, recruiters, and supporters over the past 30 years were invited to the celebration in Lisbon which was held at IFCM’s new home, the Palacete dos Condes de Monte Real. We were delighted to welcome two former conductors: Frieder Bernius (Germany) - 1990, 1991, 1995, 1999, 2005/2006 and Josep Vila i Casañas (Catalonia, Spain) - 2010, 2019). The first WYC conductor, Stefan Sköld (Sweden), sent a message which was read during the anniversary reception. We were thrilled to have two singers from the first WYC (1989): Alec Jackson (UK) and Katrin Kern (Estonia). Other WYC alumni and recruiters came to the anniversary celebrations from Sweden, France, Mexico, South Africa, Peru, Canada, Norway, Netherlands, United States, Portugal, Spain, Finland, Ghana, and Italy. The highlight of the day was everyone joining together to sing “The Irish Blessing”.

“May this choir live long and continue to offer young singers from across the world the opportunity to learn from great masters, as well as their peers, and to promote peace and tolerance!” (Sonja Greiner, WYCF board member)

For more details, articles, and photos from the 2019 WYC session, see: