Conductors Without Borders in Africa
Projects

Thanks to the initiative of Serge N'Tcha M'Po, choral conductor and President of the recently created Federation Harmonie Cantat of Benin, a very first session of Conductors Without Borders was organized in Abomey-Calavi in the suburbs of Cotonou, Benin, from September 3 to 7, 2019. This training course presentation should lead to a three-year cycle of CWB sessions but financial resources are needed to cover this cycle. Fortunately Mr. N'Tcha M'Po and Thierry Thiébaut, CWB coordinator, met with the Counsellor of Cooperation and Cultural Action of the French Embassy in Cotonou and decision was taken to draft a triennial partnership agreement between the French Institute of Cotonou and A Coeur Joie International for the years 2020, 2021 and 2022. It was also decided to set up this convention at the end of the year and to start the training cycle in early 2020. The resulting budget will probably not cover the total cost of this training the first year. Additional support for the CWB project will be required.

As planned end of 2019, a Conductors Without Borders session was organized in Abomey-Calavi, Benin, from January 25 to February 2, 2020. Please read the report in French here.

A third session was planned end of 2020 and was postponed due to the pandemic. It was possible to organize it from January 24 to 29, 2022. Please read the report in French here.

The first session of the IFCM Project Conductors Without Borders was organised in Douala, Cameroon, in 2021, thanks to the collaboration of A Coeur Joie International, FECAMUCH-ACJ (Choral Federation A Coeur Joie of Cameroon) and the International Federation for Choral Music. This is the first session of a three-year programme, based on the rate of one week per semester. Since the first CWB session in Kinshasa in 2010 under the leadership of Thierry Thiébaut (A Coeur Joie International), there has been 12 training sessions for choral conductors in DR Congo. The success of these training sessions is due to the faithful commitment of the participants over the past 5 years. A total of 138 trainees participated. The repertoire usually includes pieces from Renaissance to contemporary compositions … as well as African polyphony of course. Since the beginning in 2010, the planning of these sessions has been built on the same concept: in the afternoon, 3 hours of conducting courses arranged by levels, then gathering of all the participants who will form the choir in residence, reinforced by other local singers, so that the trainees can practice conducting with a real choir. At the end of the session, some trainees in the intermediate and advanced levels conduct the choir at the final concert.

Starting in 2012,  CWB has been taking place in Libreville, Gabon, thanks to A Coeur Joie Gabon and the African Confederation for Choral Music (Yveline Damas, President). A Choral Music House is now operating on a full-time basis in Libreville and provides the CWB with several air-conditioned rooms that allows a good quality work. The French Institute graciously provides their 600 seats concert hall for the presentation of the final concert. There is an exceptional stability in the attendance of the sessions’ trainees and a real progress of both academic and practical ongoing in learning retention. Among others, the trainees learns the rehearsal techniques and gestures (mostly taught individually at the music stand). Every evening, the training  focuses on a vocal warming up with the choir in residence composed by singers and conducting trainees. The Cultural Service of the French Embassy has been sponsoring several sessions. Some new instructors from the trainees groups are now able to teach on their own. A children’s choir repertoire session is also organized in parallel on a regular basis. 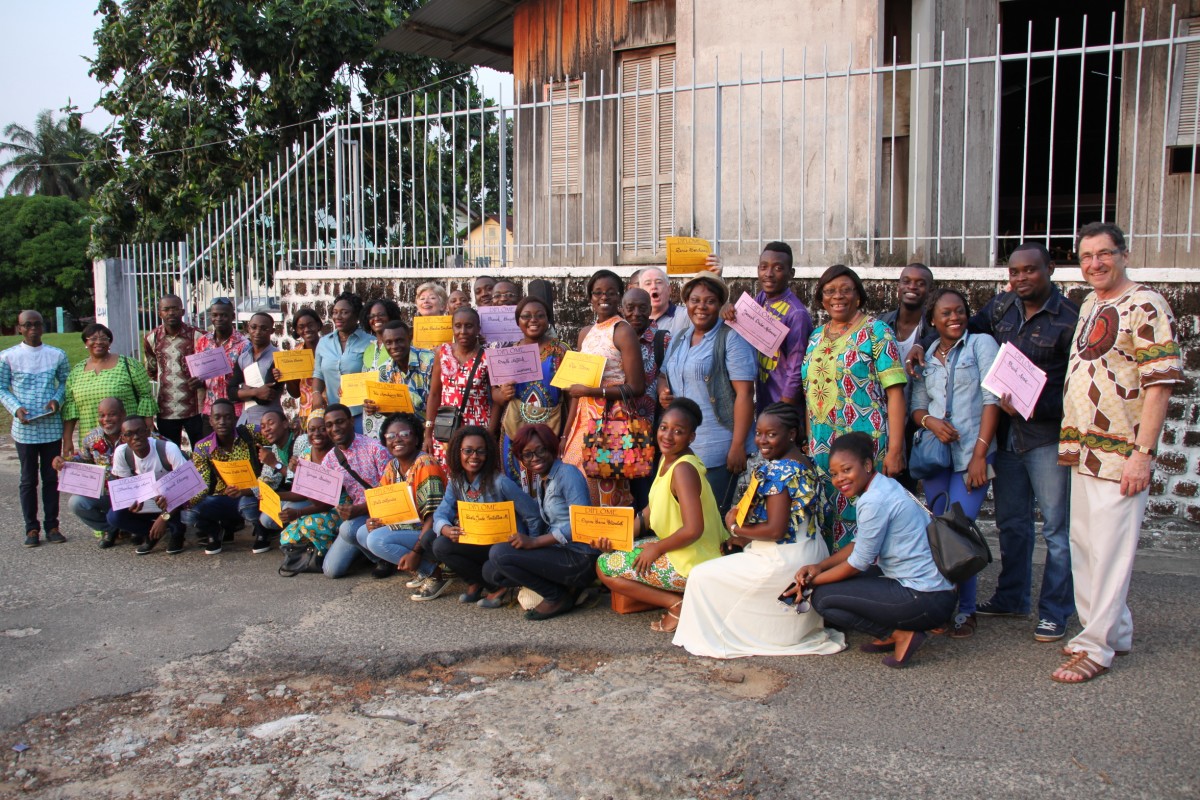 The missions of Choral Conductors Without Borders in Ghana are organized in Accra. The aim of these missions is to build a CWB plan of actions, following the request of Edusei Derkyi, former IFCM Advisor. The first session at the music department of the Winneba University of Education was remarkably successful, with an audience of 60 students, one third of them being conductors. The second session organized at the University Legon of Accra only had a few participants. The CWB approach in Ghana is different than the one in the French speaking countries of Africa. Its aim is mostly to spread awareness of the different choral cultures of the world among the Ghanaian conductors. Three pilot universities were selected. The instructors should be different each year and from different cultures and parts of the world. They should be serving during six days, two days in each university. Bilateral agreements between the instructors’ universities/organizations and the three selected universities are set up in order to eventually provide a financial contribution to implement the program. The financial resources of the development program is the responsibility of the local federation while the operating costs will be covered by IFCM.

CWB Sessions started in October 2013. In 2014, during a meeting with the French Cultural Department in Abidjan, the French Foreign Minister offered to support the CWB program and funded four missions of one week in 2015 (two instructors for two weeks during the year)... This was the same Ministry that already sponsored the two CWB missions in October 2014.
The first session 2015 sponsored by the Cultural Department of the French Embassies was successfully organized. Thanks to the help of the freshly re-structured choral organization, now called the Ivorian Movement for Choral Music (Mouvement Ivoirien de Chant Choral - MICC), this fifth session benefitted from improved working conditions, such as comfortable, soundproofed and air-conditioned rooms provided by the City Hall of Cocody.

The first session 2017 is also the end of a three year training cycle for choral conductors. 53 trainees participated in this first cycle. 24 diplomas were given, including six that will lead to a higher level training cycle. 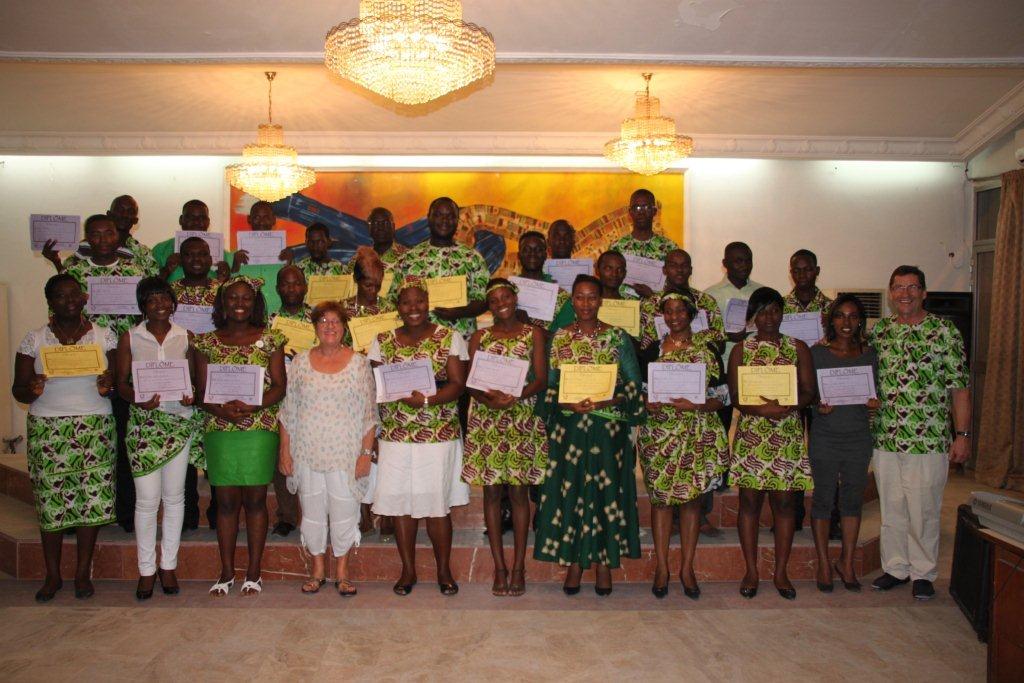 In October 2016, Tim Sharp (ACDA) and Thierry Thiebaut (IFCM Board Member and A Coeur Joie International President) took "Conductors Without Borders" and the programs of ACDA to Kenya in October. Hosted by Kennedy Okeyo Wakia, Tim and Thierry worked with a variety of choirs and many conductors, introducing them to the work of IFCM. 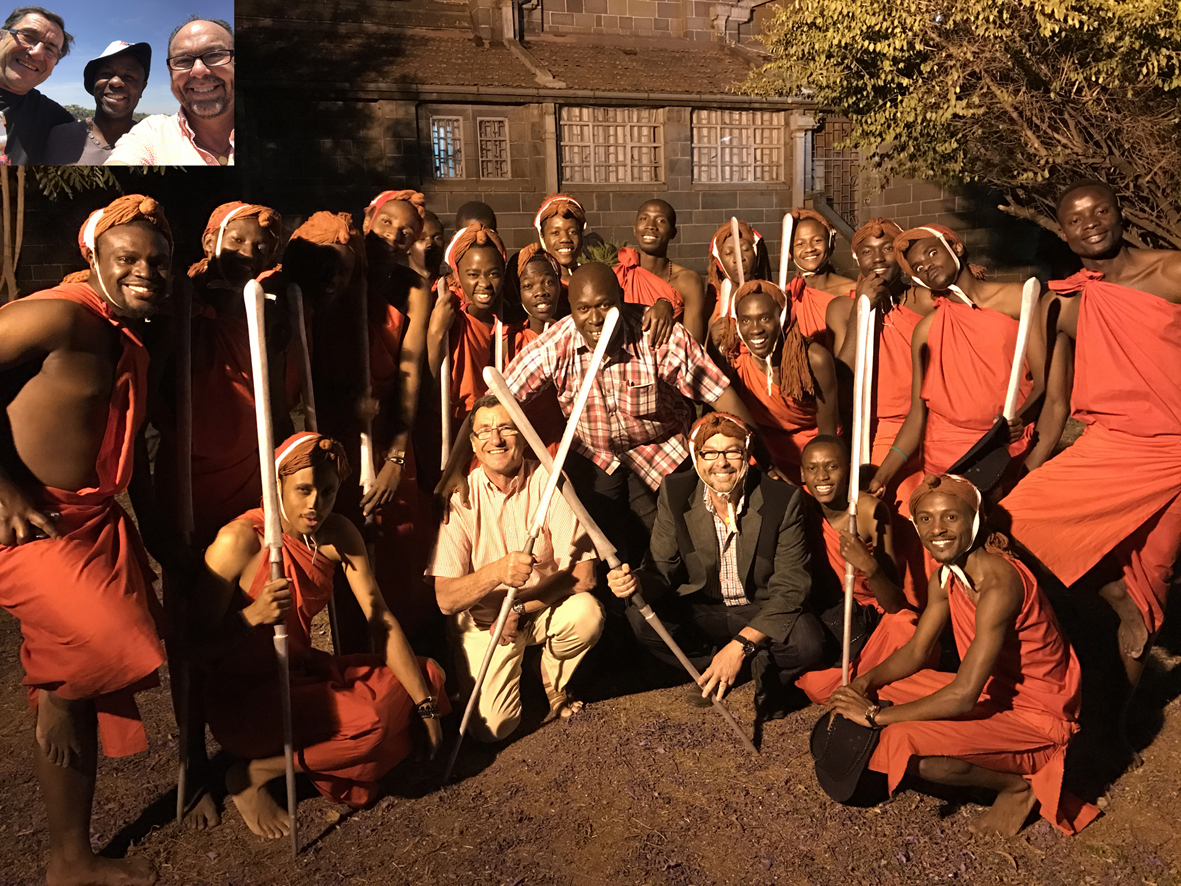 In 2019, following a meeting between Manvinder Rattan, CEO and Head of Conductor Training at Sing for Pleasure, USA, and Ken Wakia, IFCM member and former singer and conductor of the World Youth Choir, Sing for Pleasure proposed its first ever Conducting course in Africa, in Nairobi, Kenya, from 18 to 29 March 2019, thanks to the generosity of Thierry Thiébaut, CWB coordinator, and the programme Conductors without Borders of the IFCM. Read Manvinder's report.

In November 2013, a training session for music teachers was organized at the music school of four different cities of Morocco. This session received the support of the Moroccan Association for Musical Education, A Coeur Joie International and Neemrana France. The total number of participants was 160 (Casablanca: 50, El Jadida: 40, Marrakech: 45 and Agadir 25). The goal of this program is to raise awareness on choral music with vocal polyphony and choir conducting.

This choral conducting training program started in June 2013.  The last session was organized from April 19 to 22, 2016. This program must be continued as it addresses a range of expectations on the part of the singers and conductors in Senegal.

As the program spreads, other countries, like Cameroon and Nigeria, will soon join the CWB programme that is now developed in eight countries of West and Central Africa.

The first CWB session was organized in Lome, Togo, from December 13 to 18, 2016 thanks to the Togolese Association of Choral Composers (Sylvain Gameti, President), A Cœur Joie International and the International Federation for Choral Music. The instructor was Thierry Thiébaut, President of A Cœur Joie International and IFCM Board member. This session was intended to evaluate the participants to establish courses which match the needs of the region and will be part of a three years training program, including a special program to teach local instructors as it is the case in DR Congo, Ivory Coast, Gabon and Senegal. 15 trainees and 35 singers attended this December session. Since then, four more sessions have been organized in February and in November 2017, in March 2018 and in February 2019